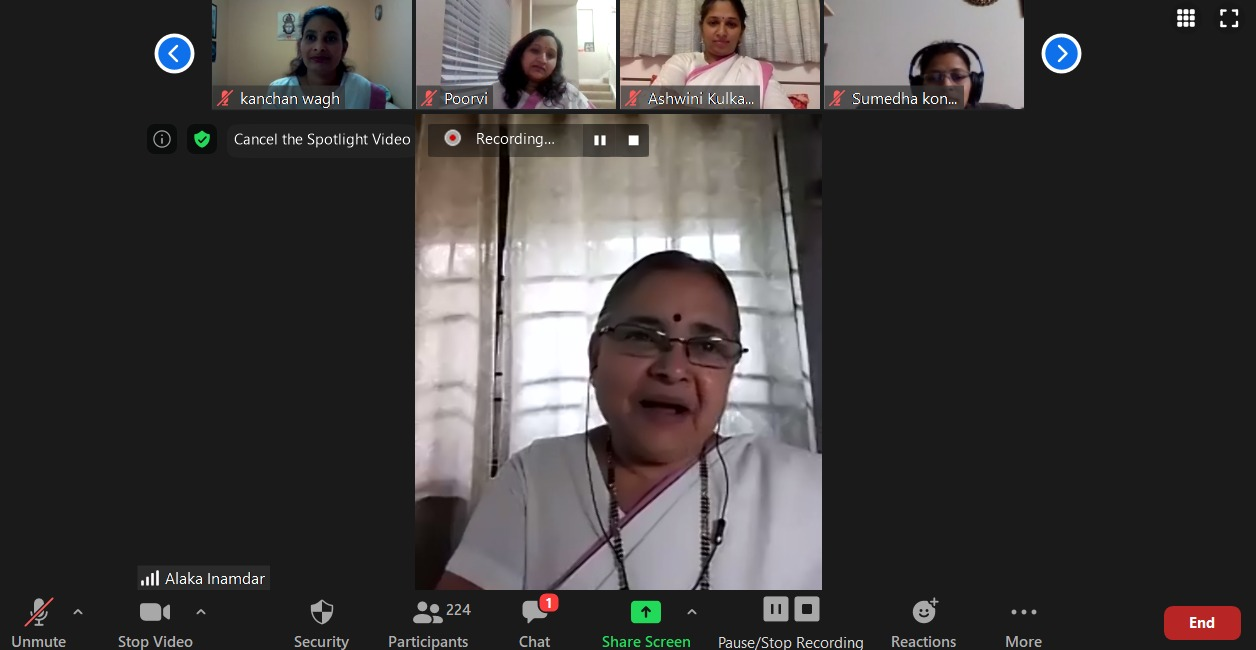 To remember Vandaniya Laxmibaiji Kelkar, whom we fondly call as Mausi ji, Central pacific Sambhag sevikas and yuvatis hosted Sevika Sanghik on her birth anniversary, 30th June 2020 Tuesday from 8:30pm to 10pm. Mausi ji was the founder and aadya Pramukh Sanchalika of the Rashtra Sevika Samiti. Her birth anniversary is also celebrated as Sankalpa din in Rashtra Sevika Samiti reminding us of our dayitwa(duty) towards the community. There were more than 225 sevikas and yuvatis who attended the sambhag sevika sangak. Few sevikas from other sambhag also joined the same. Six sevikas were involved in the planning and coordination of the sanghik. Special efforts were taken for the sampark by calling the sevikas in respective gatas. The session included chanting of “Ashtabhuja” stotram and brief information about the sewa work done by HSS in COVID 19 pandemic situation. We were honored to have Mananiya Alka Tai ji Inamdar, the Akhil Bhartiya Saha Karyavahika (national joint secretary) of Rashtra Sevika Samiti in Bharat, as the baudhik vakta. The baudhik of Alka Taiji was very inspirational and well appreciated by the sevikas. Alka Taiji shared her own childhood experiences with Vandaneeya Mausi ji, many inspirational incidents from Mausiji’s life and how Mausiji became her hero. She told many stories about Mausi ji’s “Gun Grahakata” – how she looked for various skills in sevikas and used them appropriately for Samiti Work. She talked about how mausiji inspired many Sevikas to become financially independent to help society, to spread Hindutva through kirtans, to attract more women in samiti through craft skills etc which gave new dimension to expand samiti work. Alka Taiji emphasised how Mausi ji with her selfless action and courage brought outstanding transformation in the society. The baudhik was followed by a question & answer session which lasted for 30 minutes. While answering all the questions patiently, Alka Tai ji helped the sevikas to understand the importance of their contribution towards family, community and eventually to humanity.