Concept of Gods and Goddesses

Concept of Gods and Goddesses

CONCEPT OF GOD IN HINDU DHARMA

Before we learn about various forms of Gods and Goddesses we pray to, let us understand the concept of God. As per our scriptures, there is only ONE GOD (supreme reality or divinity) which is formless (Niraakaar) and without attributes (no specific features) (Nirgun). Let us call this Brahman. Brahman means residing everywhere. It is the source of all that exists and is present in all that exists in the world. It is the essence of all that can be experienced but not seen.

The Supreme Divinity is also Antaryami which means residing within. It refers to the God residing within hearts of all beings. As Antaryami, God serves as an inner witness to the things that one does.

Although the Brahman is formless and without attributes, it can manifest in different forms. Three major and very prominent manifestations are – Brahma, Vishnu and Mahesh (Shiva). Each one of the three forms represent one major part of the Brahman. There is a Creator (someone who creates), the Preserver (someone who maintains) and a Dissolver (someone who takes things apart so they can be created again). Let us explore them in detail. 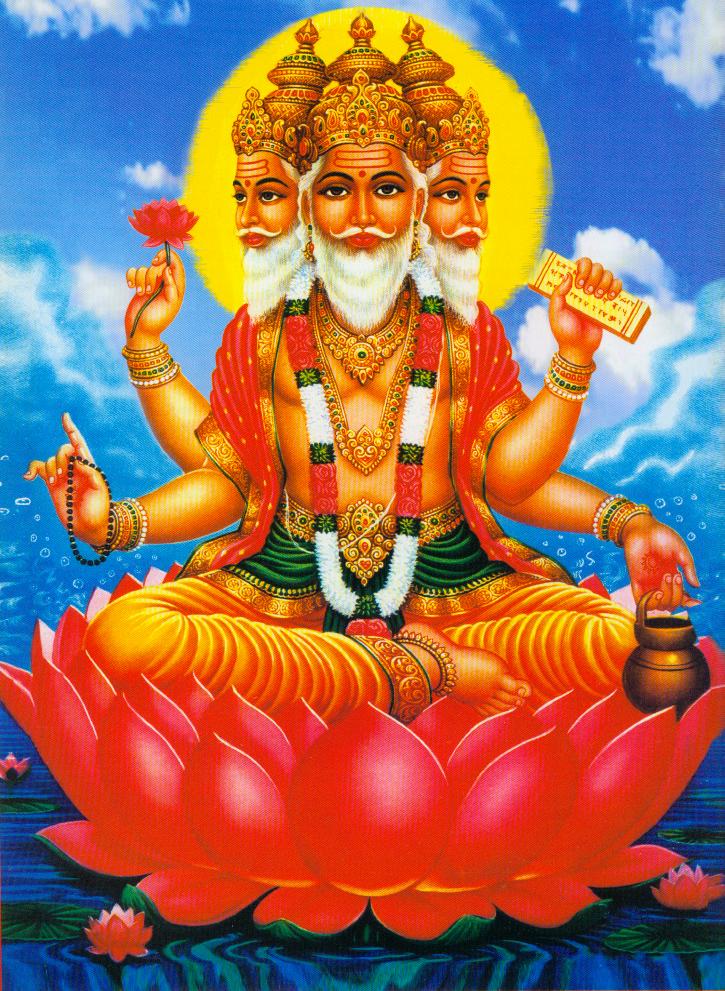 Brahma is known as Creator. He is also called as “svayambhu” because in reality no one created him – he created himself. His function is to create the universe (the world) and all beings. Brahma is usually shown red in color with four heads, bearded faces, and four arms. His four faces symbolically represent, the four directions, the four Vedas. In his hands Brahma holds four sacrificial tools – a kamandalu (pot), a rosary (mala – a sacred string of beads), a ladle, and the Vedas. He is usually portrayed sitting on a lotus or riding a white swan, which is known for its judgment between good and evil. Unlike other gods, Brahma is never shown holding weapons. 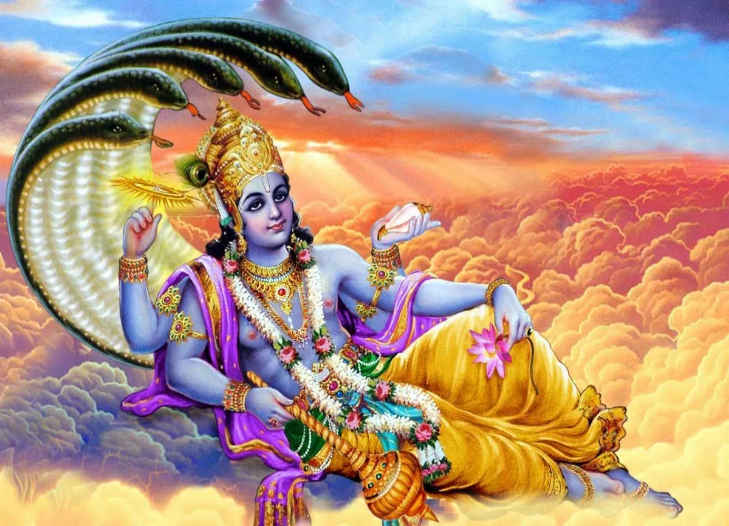 Vishnu is the preserver and upholder of Hindu Dharma. He helps to save the world from evil and uphold righteousness. The color of Vishnu is dark blue, denoting his universe dimensions and his connection with the Vedic gods of rain and thunder and his relationship with the earth. Vishnu has four arms – one holds a shankha (conch shell) a sign of the divine sound “Aum,” the second holds a chakra (discus) to represent the wheel of time, the third holds Padma (a lotus) as an example of glorious existence, and the last holds a gada (mace) to indicate the power and punishing capacity of the Bhagawan if righteousness (dharma) in life is ignored. He lies on Seshanag (a powerful, coiled serpent) who represents the sleeping universe.

The vehicle of Vishnu is Garuda (eagle), the king of birds. Garuda is an assurance of fearlessness at the time of calamity. When dharma values are under threat, Vishnu emerges out of his transcendence to restore peace and order on earth. Vishnu has ten incarnations, the most popular are Rama and Krishna. 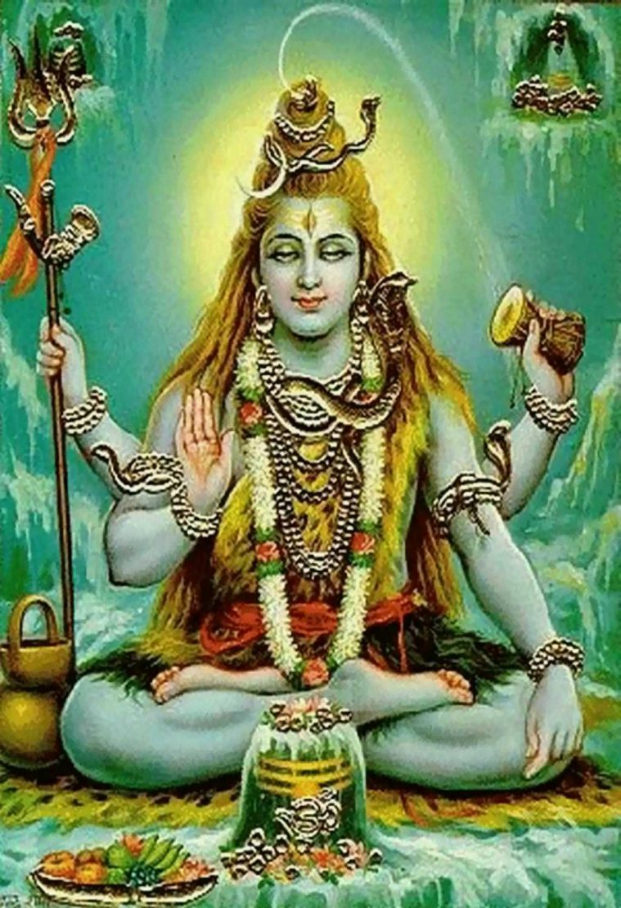 Shiva is also known as ‘Mahadeva’ (the great God), is the god of Dissolver. He dissolves or removes negative presence such as ignorance and evil, in order for the transformation to take place for better. He is represented as linga, a symbol of regeneration. Shiva has blue throat because of poison which he drank and dissolved to save the world from destruction. He has three eyes. His third eye is believed to be eye of wisdom and when opened destroys evil and myriad illusion. In one hand he holds his weapon trident (Trishul), represents three qualities knowledge, desire and implementation. In another hand he holds damaru symbolizing the connection with primal sounds AUM. He wears snake around his neck which represents his control over desire and sensuality. The crescent moon adorns his hair and Ganga (river Goddess) flows out of his topknot. 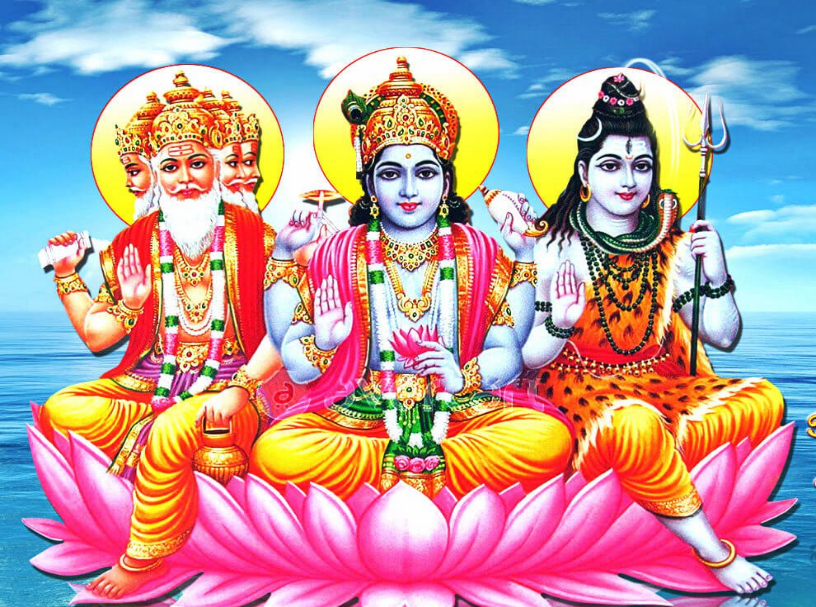 This grouping of Brahma, Vishnu and Shiva is called the Trimurti – the Hindu Trinity. Though Brahma, Vishnu and Shiva were separately described and have their own unique features, one must remember that in the end they are all one and the same. Thus, the Trimurti demonstrates that the Creator, Preserver and Dissolver ultimately work together as GOD. They symbolize different aspects of human personality including wisdom, knowledge and power.