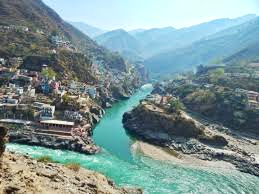 The river Ganga is one of the most sacred rivers for Hindus. It has religious as well as historical importance. Many many temples and spiritual places are located at the banks of the river such as Haridwar, Prayag (Allahabad), and Kashi. The source stream of the river Ganga originates from the Himalayan Mountains, which is called Gangotri. 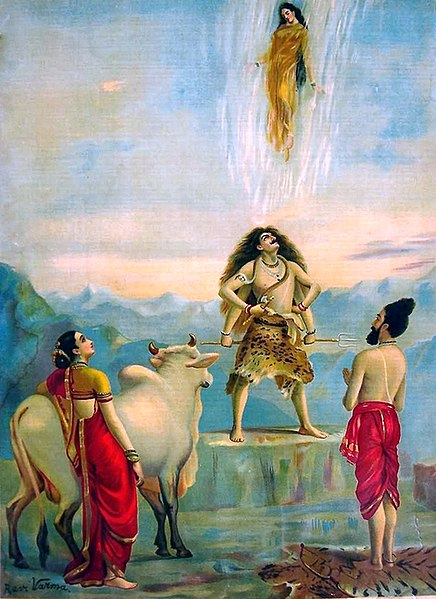 According to the Puranas, the river Ganga was in heaven and was brought down to the Earth. The legend is that the great King Bhagiratha did severe Tapasya (spiritual discipline that involves deep meditation, austerity/moderation, self-discipline, controlling body to generate energy, praying to the God) to bring Ganga to the Earth so that the river could wash away his ancestors’ impurities and cleanse them to allow them freedom. Because of Bhagiratha’s relentless efforts, a small current of Ganga flowed to the earth. She followed him wherever he went. As Bhagiratha was the reason behind Ganga’s arrival to the earth, river Ganga is known as Bhagirathi. She is also known as other names such as Alaknanda, Mandakini, Jahnavi and Gandaki. Often, she is considered a daughter of the Himalayas. Picture shown here is depiction of the descent of Mother Ganga from the sky

The river Ganga is mentioned in several Hindu scriptures such as the Vedas, Ramayana and Mahabharata. It is personified and worshipped as a Goddess by Hindus. They believe that if they take a bath in the river on certain occasions, their impurities will be washed away and they will be cleansed and pure of troubles. They travel from distant places to immerse the ashes of their loved ones (after they are dead) in the waters of the Ganga so that their soul will be purified.

Several sacred religious temples are located on the banks of the Ganga. Hindus carry sacred water from the river Ganga in copper pots after making the pilgrimage to such places. It is also believed that drinking Ganga’s water cures illness and cleanses a person’s soul. It is a custom that whenever a person is dying, he/she is offered the water of Ganga so that his/her past sins will be washed away. That is why most Hindu families always keep a vial of water from the Ganga in their houses.

The ancient scriptures mention that the water of Ganges carries the blessings of Lord Vishnu’s feet; hence Mother Ganges is also known as Vishnupadi, which means “Emanating from the Lotus feet of Supreme Lord Sri Vishnu.” Also, her proximity with lord Shiva and accomplished sages have made her more divine and pure.

The mighty Ganga, more than 1500 miles long, originates in the mountains of the Himalayas, and flows in south-eastern direction through the plains of North Bharat (India) and merges into the Ocean at the Bay of Bengal. It is because of that the Bay of Bengal is also known as ‘GangaSagar’. At some places it is so wider, spread like an ocean where you can not see the other end.

The land along the banks of the Ganga has been intensely cultivated. It is particularly fertile (good for farming) because of the sediment (soil) periodically deposited by the floodwaters of the river. There are hundreds of swamps and lakes on its banks. Water from the Ganga has a purifying property. Any other water mixed with even the minutest quantity of Ganga water becomes holy Ganga water, and inherits its healing and other holy properties. Also, despite its many impurities, Ganga water doesn’t rot or stink if stored for several days. 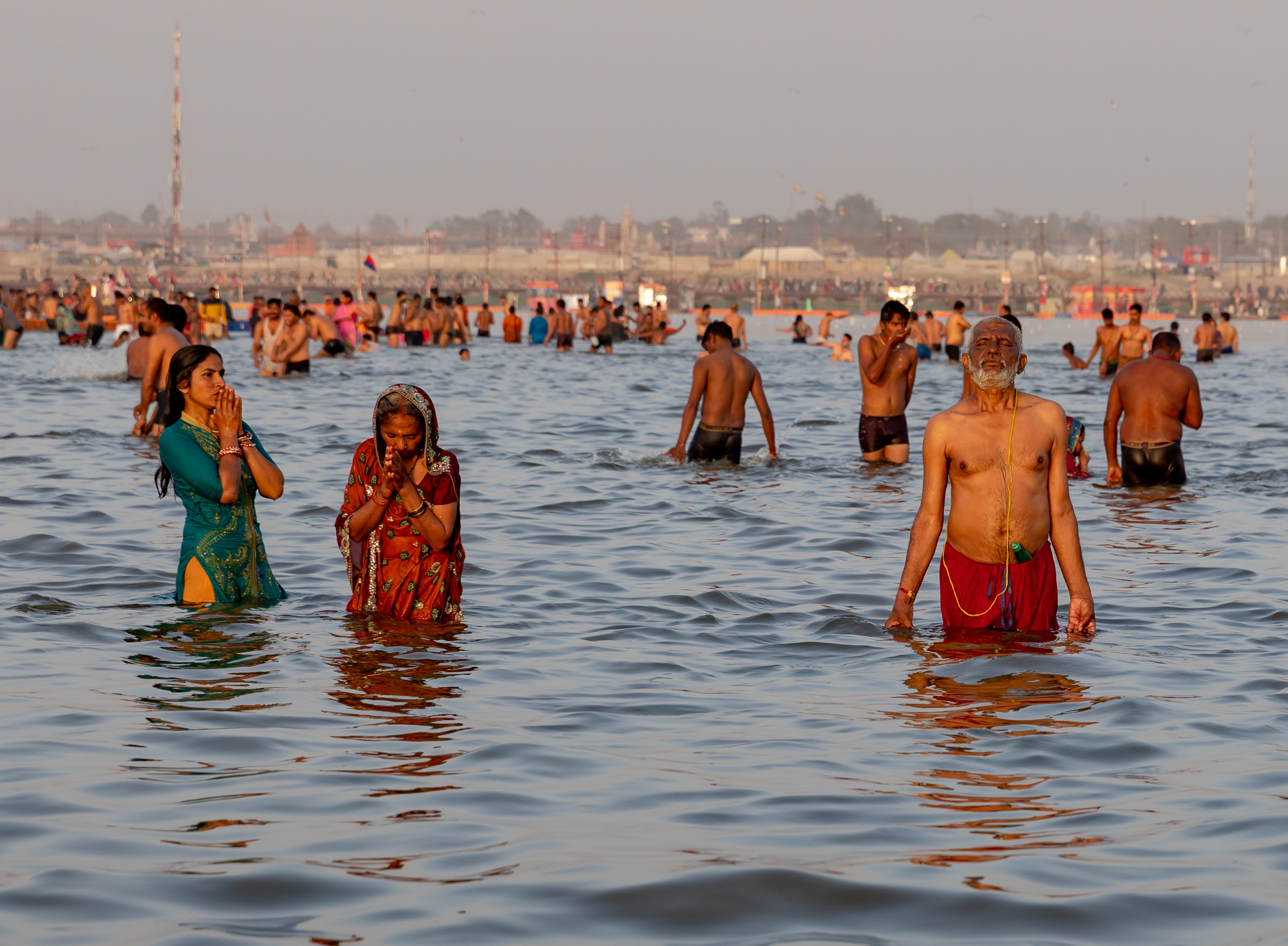 Some of the most important festivals and religious celebrations are celebrated on the banks of the river Ganga. Kumbh Mela, the biggest gathering of people in the world, is one of them. 100 million people perform pooja and take bath in 49 days of Kumbh Mela. This huge gathering can be seen from space.

Saraswati and Yamuna are two of the most sacred rivers in Bharat. Prayag is a place where all three rivers – Ganga, Yamuna and Saraswati – meet. It’s called triveni sangam, which literally 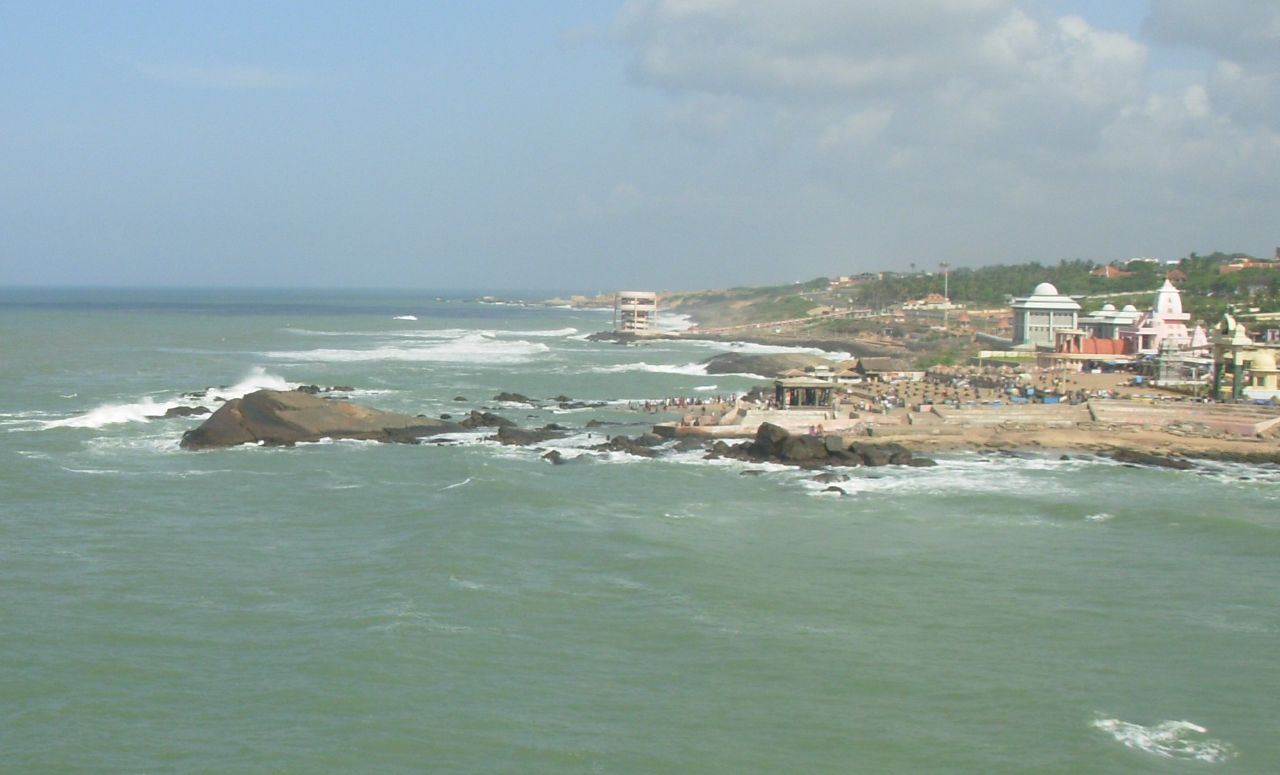 means “junction of three rivers”. Nowadays, the Saraswati river is not visible. But the scriptures have a lot of references about this river. It is believed to be flowing underground.

All in all, the river Ganga is the most sacred river for Hindus. She is like a mother who embraces her children even though they are dirty, and nourishes them. In your next trip to Bharat, try to visit a few spiritual places on the banks of the Ganga and feel why and how Hindus have a lot of shraddha (which means sincerity or faith) for this river.