Hanuman Jayanti is a festival celebrated by Hindus. It is the birthday (Jayanti) of Hanuman. Hanuman is one of the most popular gods of Hindus. Hanuman is a “vaanara” god. “Vaanara” derives from the words vana (“forest”), and nara (“man”), thus meaning “forest man”. Story of vaanaras is part of the great epic Ramayana.

Hindus believe that Hanuman is an incarnation of Lord Shiva. The mother of Hanuman was Anjana. Based on his mother’s name, Hanuman is called Anjaneya, that is, one born of Anjana. His father’s name was Kesari. He is blessed by Vayu as the god of winds. So he is also known as Vayu Putra (Son of Vayu, wind god). He was born on Chaitra Shukla Purnima (Hindu Calendar) who usually falls on the full moon day during the months of March-April. He was a very powerful and strong god. He was a devotee of Rama, a form (avatar) of Vishnu, whose story is narrated in Ramayana. Hanuman is a symbol of strength, perseverance, and devotion. He is worshipped as a deity with supreme powers and conquers evil spirits. 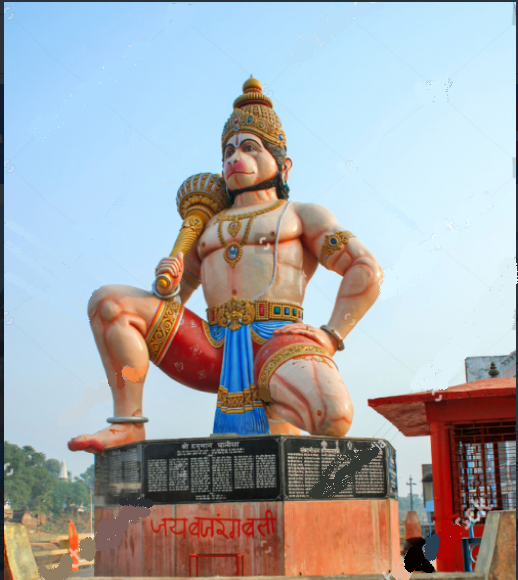 Hanuman Jayanti is celebrated with great devotion. Devotees visit Hanuman shrines, observe fasts, offer prayers and puja and read the Ramayana. On this day the idols of Hanuman are given a special coating of vermilion mixed with clarified butter. People offer “besan ladoo” or “boondi” as prasad and chant various hymns (religious songs) singing his glory.

When Hanuman was a kid, one day while playing, he was hungry and not able to find anything around to eat. He noticed the Sun and it appeared to him like a red mango fruit. He flew towards the Sun. The sun god spotted the child flying towards him at an enormous speed. Sun god sought after the help of Indra, king of gods. Indra pushed away Hanuman with his powerful weapon, the thunderbolt. (Vajrayudha). Hanuman had taken the blow on his face. He winced as his face started bloating. Wind god – Vayu was alarmed at the sight of the falling child. He moved quickly to gather him in his arms. Carrying him, Vayu swiftly went inside a cave. The moment Vayu locked himself in the cave, the wind stopped blowing. Men and animals gasped for breath. Indra and Sun-god realized living beings cannot live for long without air. All gods, led by Indra, gathered outside the cave, appealed to Vayu to come out.

“You have such a wonderful son, Vayu,” said Indra, “What a boy!”

“What strength! And he is fearless too,” said Surya.

“When he grows up, Hanuman will achieve great feats,” said Indra.

“I grant Hanuman the boon of extraordinary strength,” said Surya.

“I grant him knowledge and wisdom,” announced Indra.

“He can grow large or small as he wishes. He can assume any form,” said one of the gods.

“Not even death can touch him. I will make him immortal,” said Indra.

Vayu was pleased to hear the boons showered on little Hanuman. Meanwhile the little Hanuman had recovered from the pain. Vayu came out of the cave to thank the gods. The wind began to move. Men and animals could now breathe with ease. The gods were happy. They blessed Hanuman.

Later, when grew up, Hanumanji assisted Sugriva, who was living in Kishkindha, by being his minister and constant companion. Hanuman was an excellent ambassador. He could easily understand the nature of other people. Hanuman helped Sugreeva by bringing Shri Rama and Lakshmana, who were in exile and looking for Sita kidnapped by Ravana. Hanuman was a great devotee of Sri Rama. He went in search of Sita to Lanka. He crossed the ocean, met Sita devi, destroyed Lanka by setting fire and brought the news of Sita to Sri Rama. 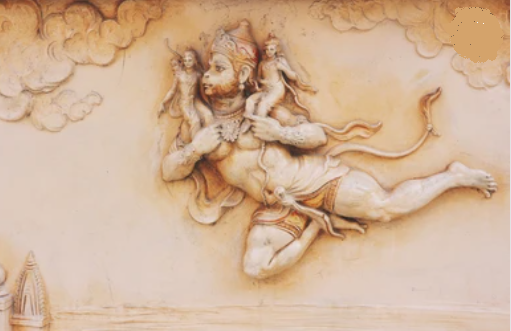 After winning the war against Ravana and reaching Ayodhya, Sri Rama Himself said to Hanuman, “I am greatly indebted to you, O mighty hero. You did marvellous, superhuman deeds. Sugriva has his kingdom restored to him. Angada has been made the crown prince. Vibhishana has become king of Lanka. But you have not asked for anything at any time. You threw away the precious garland of pearls given to you by Sita. How can I repay my debt of gratitude to you? I will always remain deeply indebted to you. I give you the boon of everlasting life. All will honour and worship you like myself. Your icon will be placed at the door of My temple and you will be worshipped and honoured first. Whenever My stories are recited or glories sung, your glory will be sung before Mine. You will be able to do anything, even that which I will not be able to!”

The “Ji” suffix after any name accords respect. Hanumanji is therefore the living embodiment of the power of Ram- Nama (Rama’s name). He was an ideal selfless worker, a true Karma Yogi who worked without desires. He was a great devotee and an exceptional Brahmachari (one who never married) or celibate. He served Sri Rama with pure love and devotion, without expecting any fruit in return.

Hanumanji was the wisest of the wise, strongest of the strong, and bravest of the brave. It is said that one who meditates on him and repeats his name attains power, strength, glory, prosperity, and success in life. Hanumanji is said to be Chiranjivi (immortal) and is present in the world even today. He is the link between the devotees and God, for, as instructed by the Lord, he serves, protects and inspires the servants of God.  On this holy day, worship Sri Hanuman. Fast on this day. Read the Sri Hanuman Chalisa. Spend the whole day in the Japa (chanting) of Ram-Nam (Sri Rama’s name). Hanumanji will be highly pleased and will bless you with success in all your undertakings. 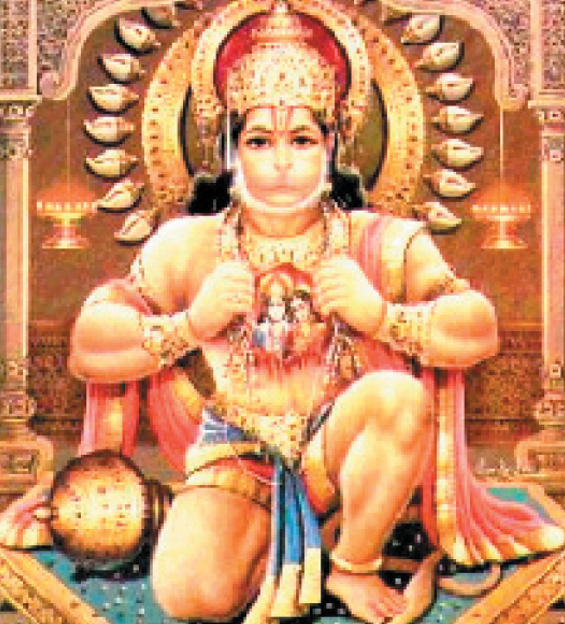 Festivals like Hanuman Jayanti remind people about the purpose of human life. Devotees who participate in such festivals should learn valuable lessons from them. The life of Hanumanji exemplifies how an ideal Swayamsevak should work selflessly and with dedication for the society.

May we always proclaim, “Bajrangbali Ki Jai”, victory to Hanumanji who has the strength of the thunderbolt.

Glory to Hanuman! Glory to his Lord, Sri Rama!

I take Refuge in Sri Hanuman. Let me pray and salute to the one who is swift as thought, the one who is more powerful than the wind, the one who has conquered his senses, best amongst the wise, the son of the wind-god, the commander of the army of forest creatures, To that Lord Sri Rama’s messenger, the incomparable Lord Hanuman, Let me seek refuge.