India’s Contribution to the Ship Building and Navigation

India’s Contribution to the Ship Building and Navigation

India has a maritime history that dates back to around 4,500 years, during the Indus Valley Civilization. There are many references to the maritime trade activities of India; they are found in Pali scriptures and are written in Sanskrit. India traded with several nations like Cambodia, Java, Sumatra, Borneo, China, South American countries, and Mesopotamia (Greece). Excavations were undertaken in Mohenjodero (an Ancient archeological site, now in Pakistan); the written texts refer to sailing ships; they are also references to sea ships in the paintings at the world-famous caves in Ajanta.

Some of the prime examples of the Indian contribution to the science of Navigation and the technique of shipbuilding include:

All these pieces of evidence point to the fact that the science of Navigation and Ship Building progressed in India thousands of years ago, and it made maritime trade possible. Indians pioneered the science of Navigation that has helped develop modern trade and transport activities by the sea. The trade which India carried on since ancient times with different countries around the world through ocean routes also helped to introduce items like cotton, pepper, and other spices to the world. 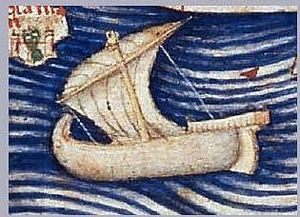