What is Hindu Dharma?

We identify ourselves as Hindus and our religion as Hinduism. But the term Hinduism is relatively new. Better term to use is Hindu Dharma. Let us learn a little more about Hindu Dharma and what it means.

Sneha’s teacher at school asked her what her name means. Sneha said she will find out from her mother and let her know the next day. Sneha comes home and is looking for her mother. Let’s see what happens next.

Like we saw with Sneha, now do we all understand what ‘dharma’ is? Dharma is what we should follow, set of responsibilities one has, the right things to do. The original names of Hindu Dharma is “Sanatana Dharma”. In the Sanskrit ‘sanatana’ means ‘eternal’, something which is always there. The set of good values, good principles have always been there in the past, is there now and will be there in the future as well. Since it will always be there, it is eternal.

This means that as long as human beings and life exist, these principles will also exist and hold true i.e. Sanatan (eternal). It refers to the principles that guide individuals and hold the society together in harmony, in peace. These principles include how one should behave (like ‘nonviolence’, ‘truth’, ‘non-stealing’, ‘cleanliness’, ‘control of the senses’ etc.), relationship with nature, duty towards family and society, how duties change at different stages of life, understand the basic concepts (like God, karma etc.) and so on. This is the reason why Hinduism is sometimes referred to as a way of life instead of a religion. As you can see, Sanatan Dharma leads everyone to a happy life, which in turn leads to peaceful society. We will learn about some of these principles in the following chapters.

It is also called “Vishwa Dharma”. ‘Vishwa’ means world or universe. Hindu Dharma is truly a universal religion because it is based on basic principles which are applicable not only to Hindus but the entire humanity. When a Hindu prays, he does not pray for wealth for himself, his family, his community or Hindu society. Instead he prays for the welfare of all the people of the world. All Hindu prayers are for the entire humanity and not for a particular sector or group.

After reading this, you must be feeling confident and proud that you belong to the Hindu Dharma. Though Hindu Dharma is complicated, one aspect of it is quite simple to understand which is – whatever good you do is Dharma and whatever bad you do is A-dharma. So, always do good (always do Dharma). Always be nice and humble to everyone. As you grow, you will learn and experience more about the Hindu Dharma. Since ages, our forefathers have retained this treasure. Now it is our turn to do this job.

Hindu Dharma is the oldest surviving civilization, at least 5000 years old based on evidence but recent studies show that it possibly much more than that (as much as 15000+ based on some sources). It originates from Bhaarat, India. The practices, traditions and way of life in that geographical area came to be known as Hindu Dharma to others. Unlike other religions, Hindu Dharma did not originate from a single person, a single book or at a single point in time. However, it is evolved by various sages and rishis, who added more value in it from time to time.

How did the word Hindu get associated with us if the original name is Sanatan Dharma? Vedas described this land as “Sapta Sindhu” – the land of seven rivers which included the Sindhu (Indus) and the Saraswati rivers. 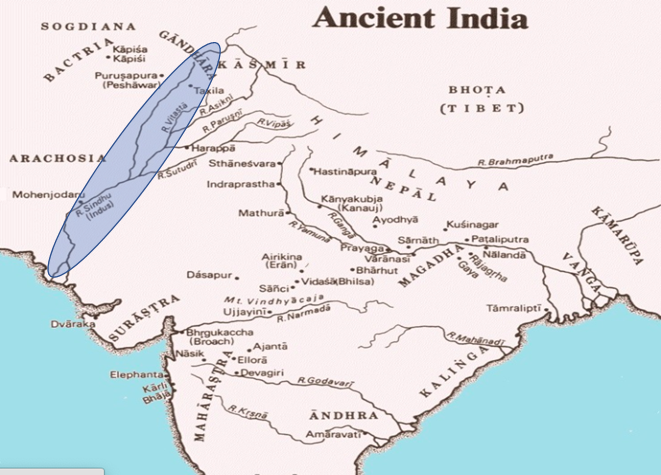 The Persian civilization collapsed at a later time, but geographically it is the area where Iran is currently located. Persian people, in their texts, referred to the river Sindhu as Hindu, as they pronounced the ‘S’ sound as an ‘H’. They also referred to the people who lived around the river as Hindus. That is why some scholars came to believe that the word ‘Hindu’ had its origin in Persia. The Greeks, who invaded the land under Alexander dropped the ‘H’ and used the name Indoos or Indus, which later led to the formation of the word ‘India’. This name was later used by others who came to India as either invaders or visitors. Gradually the name stuck.

Today, Hinduism has about 1.08 billion followers, making it the third largest religion. It is like every 7th person in the world is a Hindu. Roughly 95% of the world’s Hindus live in India.

Section 3 – Take Away and Questions

Take Away from this week:

For Groups K-2 and 3-5 (For K-2, do not worry about writing but be able to describe orally)