Kamsa was surprised that he could not kill Devaki‛s eighth child. Quite puzzled and frightened Kamsa decided to kill all children born on that night in the region.

Kamsa had a demoness named Putana as his slave. He ordered her to kill all male children born that night. A ruthless woman, Puthana went on a killing spree. She would disguise herself and kidnap newborn children as they were sleeping, and ended up killing several children, either by strangling them or breast-feeding them with poisoned milk. The people of Mathura and the surrounding region were terrified and heartbroken at the sudden loss of their children. Even after this, Kamsa was restless. He was somehow certain that Devaki‛s eighth son was still alive.

It did not take too long for Kamsa to figure out that child Krishna, his own nephew, was being raised in Gokul at Nanda-Yashoda‛s house. He summoned the demoness Putana and instructed her to go to Gokul and kill the infant Krishna.

Putana was a gigantic and hideous demon. There was no way that she could gain access to Krishna in her true form, so she transformed herself into a nice and pretty village maiden. Then, she applied poison to her breasts and set out to Gokul.

She could easily locate Nanda‛s house because not only was it the largest, but also it was decorated for the celebrations. Krishna was lying in a crib outside the house. She requested Yashoda to allow her to play with the infant for some time. Such requests had become common and Yashoda readily consented. Putana swung the baby in her cradled arms and tossed him lightly in the air and stared at his radiant face, waiting for Yashoda to go indoors. At last, the moment she was waiting for arrived. Yashoda went in to take care of some household work. As soon as Yashoda went in the house, Putana slithered out with Krishna. 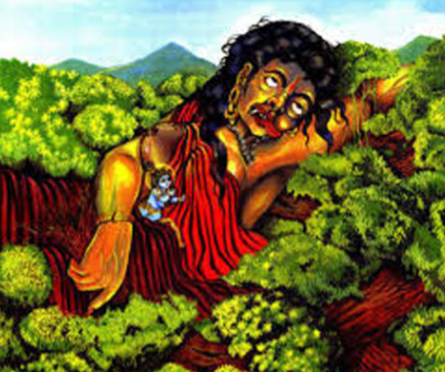 She hid behind a clump of bushes and took Krishna to her breast. Krishna was the incarnation of the omniscient Lord Vishnu and was expecting this. He sucked so hard that Putana screamed in pain. She reverted to her hideous form and flew in the air with Krishna, hoping to dislodge him and kill him by flinging him down from a height. But Krishna clung on to her breast and kept sucking until he sucked her life. The lifeless form of the huge demoness crashed down to the earth.

The heinous shriek and the thudding of the body had brought Yashoda and Nanda and the villagers to the spot where dead Putana lay. To their surprise, they saw infant Krishna gleefully playing on the bare breast of the demoness. Yashoda picked up her child and showered him with kisses. The villagers were so happy to find Krishna was alive that they, for a moment, did not wonder who Putana was and why had she come to their village.