When Kamsa learnt that the seventh child was stillborn, he was very pleased. Now he was waiting for the eighth child to be born. He knew that the next child was the one prophesized to be his slayer. Not wanting to take chances with the birth of the eighth child, Kamsa put Vasudeva and Devaki into the dungeon chained and doubled the guards. All was going according to Kamsa‛s plan until the night Devaki‛s eighth child was born.

Lord Vishnu himself had told Vasudeva that he would be taking the form of Vasudeva and Devaki‛s eighth child, Krishna, to free the world from much evil Kamsa. He also told Vasudeva that the night he would take birth, Vasudeva must take him to his friend, cowherd chief Nanda‛s house in Gokul.

As predicted by Lord Vishnu, Krishna was born in the midnight on the 8th day of the Hindu month of Shravan (July- August). Vasudeva prepared to take Krishna to Nanda‛s house in Gokul. With the magic power of Lord Vishnu, the heavy chains that held Vasudeva slid right off, many guards outside of Vasudeva and Devaki‛s cell fell into deep sleep and Vasudeva could easily take baby Krishna (eighth child) right out of the dungeons. Now all that lay between Vasudeva and Nanda‛s house was the river Yamuna.

The weather was very unpleasant, with rain pouring down and the night was extremely dark and windy. 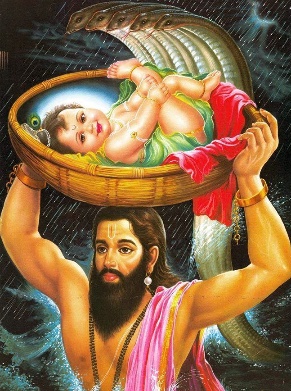 But Vasudeva knew he had to cross the river to go to Nanda‛s house and he could not stop. So, slowly Vasudeva began January Krishna to tread his way across the stormy river. The water came up to his knees, but Vasudeva kept going. The water reached Vasudeva‛s waist, but he still kept going. Vasudeva held baby Krishna on top of his head and kept going forward. Soon, the water was up to Vasudeva‛s mouth, but he kept going.

Pleased by Vasudeva‛s determination and love for Lord Vishnu, baby Krishna stuck out his foot from the basket and touched the waves of bank Yamuna. Blessed with a touch from the Lord Vishnu (in form of baby Krishna) himself, the river parted itself creating a small path for Vasudeva to walk across. Vasudeva then could easily cross the river.

By the time Vasudeva arrived at Nanda‛s house at Gokul, it was really late at night. Everyone in the village was fast asleep other than Nanda. On the same night Yashoda, Nanda‛s wife, had given birth to a little girl. Vasudeva quickly placed baby Krishna beside Yashoda and took the little girl as his eighth child.

Vasudeva walked back across the river, which closed its gap as he walked towards the prison. When Vasudeva returned back to dungeon, the chains and clasps easily snapped back onto Vasudeva and the guards awoke from their slumber. Upon seeing the newborn child, the guards rushed to Kamsa to inform him. 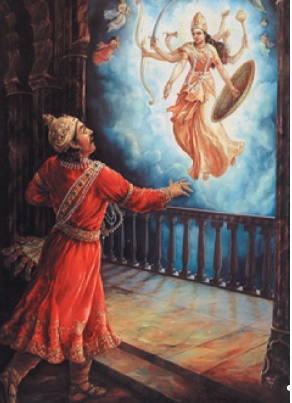 Kamsa was delighted that after eight years of waiting he could finally kill the child that was supposed to kill him. As he grabbed the little girl and started swinging her around, the baby escaped from Kamsa‛s grasp and flew away. In midair the baby transformed into her true form Goddess Durga. Durga looked fiercely at Kamsa and told him to cause no more injustice to his sister Devaki. She also let him know that his slayer, Devaki’s eighth child, was still alive and he would kill Kamsa one day.