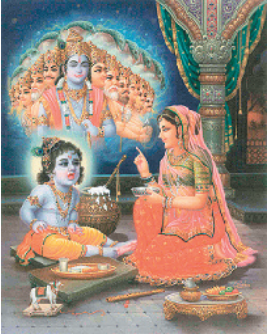 Krishna was very naughty as a child. He was very fond of butter and would steal milk and butter from the homes of the neighbors. Then, the women from those homes would complain to Yashoda about her son’s actions. One day, Krishna was playing in the fields and secretly ate dirt. The women came and told Yashoda that her son ate dirt. When Krishna came home, Yashoda grabbed him by the ear and yelled at him for eating dirt. Krishna said that he did not eat dirt. He said that she was unfair because she believed the neighbors but not him. Yashoda knowing her mischievous son ordered him to open his mouth so she could see for herself.

Krishna obediently opened his mouth. When Yashoda looked in Krishna’s mouth, she was surprised to see the entire universe in his mouth. She could see the mountains, oceans, planets, air, fire, moon, and stars. She could also, see the gods and goddesses praising Bhagwan Vishnu in Krishna’s mouth. Yashoda became scared and thought that she was just imagining things. She tried to convince herself that it was an illusion or Maya. However, she could realize that it was very true, and it was the universe. Yashoda was stunned learning the truth that her son is indeed Lord Vishnu, and she began chanting Sri Vishnu’s name.

Though Sri Vishnu was pleased with Yashoda’s prayers, he erased all her memory of the experience so that Yashoda could continue to love Krishna as her child and Sri Vishnu could fulfill his role in Krishna’s form.  Sri Vishnu did not want to deny Yashoda the pleasure of raising a child.