Narrator: Long ago, there was a wicked demon called Mahishasura. He wanted to rule the entire world and trouble all the people. To become the most powerful, here he is doing a severe penance to Lord Brahma.

Lord Brahma: [appearing from the side] O Mahisha, open your eyes.

Mahishaasura: Bless me my Lord. Please fulfill my wishes. 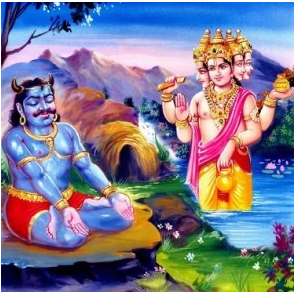 Lord Brahma: Mahisha, I’m pleased with your devotion and penance. What do you seek?

Mahishaasura: [with pride] Lord, I do not want to die. I want to rule the entire universe. Please make me an immortal.

Lord Brahma: O Mahisha, you are asking for the impossible. Everyone must die. Seek something else.

Mahishasura: Then, please make me so strong that no man shall be able to kill me. Not even the Gods.

Lord Brahma: Tathaastu. So Be it, Mahisha.

Mahishaasura: Hmmm…., I am the strongest. Nobody can kill me now. I’m the Lord. Everyone should worship me. Yes, all should serve the great Mahishaasura…. ha, haa…haaaa [roars]

Narrator: The all powerful Mahishaasura looks around and sees a group of sages offering prayers to Lord Indra, the king of Gods.

Sages [all together]: [are sitting around a fire and praying]

Mahishaasura: Who? Indra? Oh, Sages, you should offer your prayers to me. I am the Lord. Go away from here. Never ever try to insult me. Go…

[Lord Vishnu, Shiva and Brahma are in the center of the stage. All the other gods are in front of him with folded hands.]

Lord Brahma: But, there is a way.

Lord Vishnu: The united strength of all of you alone can destroy him. May goddess Parvati take the form of Chamundeshwari. All of you must give her your arms. With hundreds of arms and weapons, she will kill Mahishaasura.

All Gods [take out their weapons, raise both the hands and start shouting]

Saraswati: take all my power

Lakshmi: Take all my wealth and strength

Vishnu: The the sacred disc “The sudarshana

All other gods together say: take all our weapons…

[thus saying all leave the stage]

[Goddess Durga enters the stage with a trishul in her hand. All gods follow her, saying “jai kaali”, “jai durge”.. Mahishaasura enters from the other side. Looks at goddess Durga and comes fast to kill her with his sword. Goddess Durga hits him with her trishul. Mahishaasura falls down. 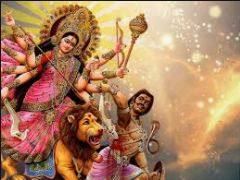 “jaya jaya hey mahishaasura mardhini, ramyaka pardhini shailasute” They sing 3 stanzas. After the bhajan, the back stage singers shout “jai jai maata”, all Gods on the stage say “durgaa maataa”; continues for a couple of times.

[ Narrator starts introducing the artists. One by one all leave the stage.]