Narrator: Namaste everyone! Let’s look at one of the famous stories from Swami Vivekananda’s childhood. Did you know he was called Naren when he was a little boy?

Naren and his friends look bored in his home.

Naren’s Friends: We are bored. Let’s play something.

Naren’s Mother (from a distance): Remember, no running in the house!

Naren: That’s okay, we can play something else. How about the ‘Meditation Game’?

Friend 2: How do we play that?

Naren: Everybody sits still and closes their eyes. Whoever opens them is out.

Naren and his friends sit on the floor and try meditation with their eyes closed. 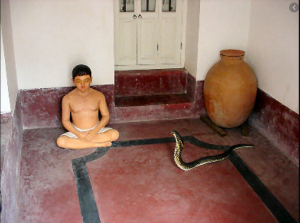 (Some of them occasionally open one of their eyes secretly and try to peek. Meanwhile, a snake enters the room from somewhere. Friend 3 sees the snake while he opens one of his eyes to peek)

Friend 3: Snake! Snake! There is a snake in the room!

Naren’s Friends: Run! Run! There is a snake!

Narrator: The snake came near little Naren but he sat motionless in deep meditation, totally unaware of what has happening. When Naren’s mother saw that the snake was in the same room with Naren, she was numb with fear but could not do anything. Surprisingly, the snake calmly crawled out of the room without harming anyone.

Friend 3: (When Naren comes back to awareness post his meditation) Did you know there was a snake in the room?

Naren: I do not know anything. I was experiencing total bliss while in meditation.

Naren’s Friends: Okay – you win! Now, what shall we play?

Friends 2: How about we go to HSS BalaGokulam every week to play fun and new games?!