It is said that one day, Godess Parvati asked Bahgwan Shiva, what is the easiest way to recite Vishnu Sahasranama Stotra. Shiva said, chanting the Sri Rama mantra just three times is equivalent to reciting the entire Vishnu Sahasra-nama (list of the Bhagwan Vishnu’s thousand names). 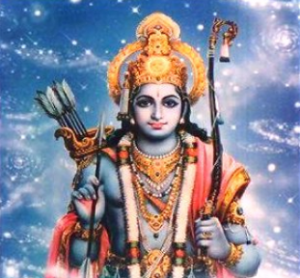 Chanting the name of Shriram constantly enjoys me. The holy name of Shriram is equal to one thousand holy names of Shri Vishnu. (Bhagwan Shiva uttered above lines to Goddess Parvati in praise of Shri Ram)

There also a story that explains the power of the mantra:

This was the sacred mantra given by Maharishi Narada when he was confronted by the robber, Ratnakar. Narada opened the Ratnakar’s eyes to the sinful life he was leading and told him, “The sacred name of Rama will wash all your sins away, and you will begin a new life.”

Transformed and chastened, the Ratnakar went into a trance, and began to utter the name that was given to him.

He grew indifferent to hunger, thirst and bodily demands. He gave himself up to the Name Divine.… His tapas continued for days on end, and he did not so much as move from the place he sat; and an anthill grew all around him; and yet the was lost to all sense of this world.

That was how the robber Ratnakar became Sage Valmiki. His life was touched with divine grace, thanks to the mantra.

Later, when Sri Rama was sent into exile into the forest, he lived in the vicinity of his ashram with Sita and Lakshmana. And Rama’s sons, Luv and Kush, grew up in his ashram as his disciples.