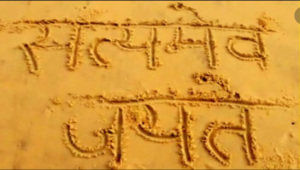 This verse is one of the most heard phrase for anyone grown up in Bharat. This is from the sixth verse of the first chapter of part three of scared text  “Mundaka Upanishad” in Atharva Veda (i.e.  Mundaka, III. i. 6). The complete verse or shloka is: