In Mahabharatha epic, Pandavas were sent to 13 years of vana vaasa (exile into forest) plus 1 year of agnatavaasa (hide their identities). Before starting agnatavaasa, they hid their weapons on the top of a Shamee tree. 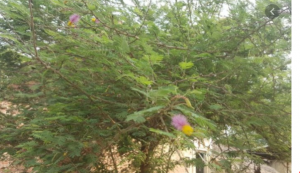 After the agnatavaasa is over, on the day of Vijaya Dasami, Arjuna took out his bow (name of his bow is Gandiva) and fought with Kauravas after worshiping Goddess Durga and Shamee tree and became victorious.

There is also another reference to Shamee tree in puranas. Bhagawan Venkateshwara (Srinivasa) had worshiped Shamee tree before proceeding to marry Goddess Padmavathi Devi.

This tree is green throughout the year. It is also used in Ayurveda for curing respiratory problems. 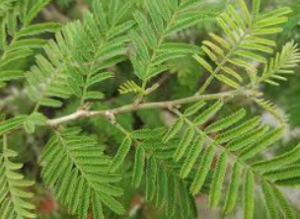 Hindus believe that, worshiping Shamee tree on the day of Vijaya Dashami (Dasara or Dussehra) is sacred and brings victory throughout the year. On the day of Vijaya Dashami, people visit Shamee tree situated on the outskirts of their city and walk around the tree ceremoniously. After that they also exchange the leaves of Shamee Tree with their friends and relatives as a symbol of goodwill reciting the following sloka.

Shamee tree, the remover of all sins, the destroyer of all enemies bore witness to Arjuna regaining his bow and Shree Rama coming back to his near and dear ones.