Rani Chennamma was born in Kakati (a small village in north of Belgaum in Karnataka), in 1778 that is almost 56 years earlier than Rani Lakshmi Bai of Jhansi. From a very young age she received training in horse riding, sword fighting and archery. She was well known for her brave acts across her town.

Rani Chennamma was married to Mallasarja Desai, ruler of Kittur at the age of 15. Her married life seemed to be a sad tale after her husband died in 1816. With this marriage she had only one son, but fate seemed to play a tragic game in her life. Her son breathed his last in 1824, leaving the lonely soul to fight against the British rule. 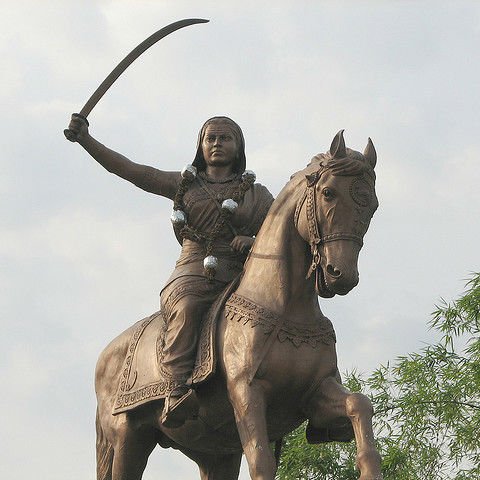 Queen Chennamma during the British rule

The Doctrine of Lapse was imposed on native states by the British. Under this declaration, native rulers were not allowed to  adopt a child if they had no children of their own. Their territory formed part of the British Empire automatically.

The state of Kittur came under the administration of Dharwad collectorate in charge of Mr. Thackeray. Mr. Chaplin was the commissioner of the region. Both did not recognize the new ruler and the regent, and informed that Kittur had to accept the British regime.

War against the British

Rani Chennamma and the local people opposed strongly British high handedness. Thackeray invaded Kittur. In the battle that ensued, hundreds of British soldiers were killed along with Thackeray. The humiliation of defeat at the hands of a small ruler was too much for the British to swallow. They brought in bigger armies from Mysore and Sholapur and surrounded Kittur. Rani Chennamma tried her best to avoid war; she negotiated with Chaplin and Governor of Bombay Presidency under whose regime Kittur fell. It had no effect. Chennamma was compelled to declare war. For 12 days, the valiant Queen and her soldiers defended their fort, but as is the common trait, traitors sneaked in and mixed mud and dung in the gunpowder in the canons. The Rani was defeated (1824 CE). She was taken a prisoner and kept in the fort of Bailhongal for life. She spent her days reading holy texts and performing pooja till her death in 1829 CE.

Rani Chennamma did not step back looking at the mighty army of British, but fought with vigor, expertise skill and courage.

Kittur Rani Chennamma could not win the war against British, but she etched her presence for many centuries in the world of history. Along with Onake Obavva, Abbakka Rani and Keladi Chennamma, she is much revered in Karnataka as an icon of bravery. She has become a legend. During the freedom movement, her brave resistance to British formed theme of plays, songs, and song stories. Folk songs or lavanis were a legion and freedom struggle got a good boost through singing bards who moved throughout the region.

It is heartening news that a statue of Kittur Chennamma was installed in the Parliamentary Building premises at New Delhi on 11th September 2007. It is the most fitting tribute to a brave queen, who was the earliest ruler in Bharat to fight the British rule.