Vasant Panchami is the spring festival. In Samskrit, ‘Vasant’ means ‘Spring (season)’ and ‘Panchami’ means fifth day. As the name indicates, this festival falls on the fifth day of the Hindu month Magh (February) which is the beginning of the spring season. This festival is dedicated to Saraswati, the goddess of knowledge and wisdom. She is considered as feminine counterpart of Lord Brahma.

Hindu Dharma, being a ‘way of life’ rather than a religion, has special significance of seasons in our lives through religious festivals. Vasant Panchami signifies the beginning of spring season. Vasant is the season when nature is at its beautiful and bountiful best. Flowers are in full bloom and trees sprout new shoots. It is a season when nature regenerates and everything is fresh and new. New life is evident in the woods and fields. Wheat and other crops enliven with new life and vitality. Mustard fields turn into a heady mix of yellow and green as the blossoms add color and poetry to life. 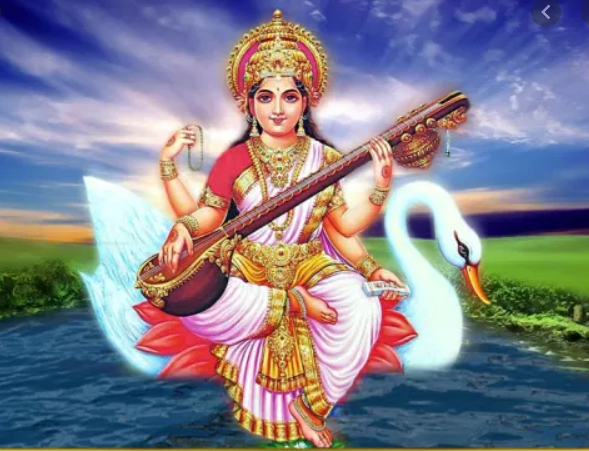 Indeed, yellow color has special importance on this day. Saraswati is usually shown as the fair skinned eternally young goddess, dressed in white and yellow garments. She has four hands. She is holding a book in one hand and a japamala in another hand. She is playing a Veena (musical instrument) with other two hands. “Book” symbolizes the Vedas (spiritual knowledge and wisdom) and japamala symbolizes meditation and contemplation or concentration. She is elegantly sitting on a lotus which symbolizes creation (life), love and kindness. The white swan, that accompanies her, symbolizes purity and peace. As a patron of Arts, she plays a song on the instrument Veena.

All her characteristics symbolizes that she is a Goddess of learning, wisdom and all kinds of knowledge including science. She is the master of the 64 arts, of which the art of love is the first and most important. It is said that She is the energy of Lord Brahma. With her knowledge, she helps Lord Brahma in generation of the world. She represents creativity and inspiration and presents herself when the weather is complacent and Nature is in its full grandeur. Vansant is therefore a season of inspiration and passion.

Saraswati is a goddess of learning, wisdom and knowledge including arts, and science. She is the energy of Lord Brahma. When Brahma creates a new world, Saraswati helps him with her knowledge. Together, they generate a new world. Knowledge and wisdom are directly linked to the creation or origin.

Throughout the Hindu scriptures, the learned (scholars) are always given higher pedestal than even the king. A King is honored within his Kingdom only, whereas the Learned is respected, even worshipped everywhere. For example, Gautam Buddha and Guru Nanak, are better known today than the kings of their times.

Schools, colleges, and other educational institutions organize special worship of Saraswati and other cultural activities. In this regard, Bhangra competition in Punjab province of Bharat is quite famous. Great scholar of Bharat, Pandit Madan Mohan Malviya laid the foundation of Kashi Hindu Vishwa Vidyal 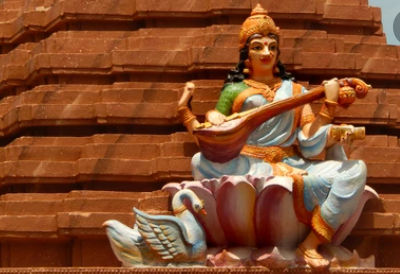 aya (also called Banaras Hindu University- BHU) on this day of Vasant Panchami which has now become a world class academic institution. It is customary to begin a child’s education on this day. Before starting, the children are expected to recite the following shloka –

Meaning: Oh Saraswati, sitting on the beautiful Lotus flower, I am beginning my education so always bless me.

Celebrations by Hindus around the world

Another name of this festival is Vasantotsav (Vasant + Utsav (festival)). In some parts of Bharat, it is also called as Basant (not Vasant) Panchami. The origin of this festival may be traced as far back as ancient times. The festival is celebrated grandly throughout Bharat in different ways. With the onset of spring, people gear themselves for celebrations. The people wear yellow dresses. The men and boys wear yellow turbans or yellow shirts and the women and girls yellow chunries or duppattas.

and erect a special dias for this day. They hold puja and community lunch there. Kite flying is popular on this day. As the festival comes close, kite makers get busy in making kites. Different colors and sizes of kites start flying in the open and clear blue sky.

In some traditional homes sweet dishes are exchanged with relatives and friends. A dash of saffron is added to the sweet dishes to get a yellow tinge. Kesari halwa and Kesari sweet rice are the favorites in Northern Bharat. Many people go to temple to offer halwa or sweet rice as a prasad to the God.

Vasant is associated with freshness and a new beginning in all spheres of life. An old Hindi film song says, ”Aayee jhoom ke Basant, jhoomo sang sang mein” (The spring is here and let us sway together) The end of harsh winter makes a new spring all the more welcomed. There is a song on every lip with a new confidence in every heart to chart a new course. This is a time when everyone gets together to celebrate and enjoy life.

Vasant Panchami is therefore a festival full of religious, seasonal, and social significance and is celebrated by Hindu people all over the world with new sense of optimism.

1) Vasant Panchami festival falls in the month of February.

2) Vasant Panchami is dedicated to the Goddess Saraswati.

3) Saraswati is the Goddess of Learning, knowledge, and wisdom.

4) Saraswati is the energy of Lord Brahma. SHE helps Lord Brahma in the creation of new world.

5) It is said that Hindus should chant Saraswati shloka before study.