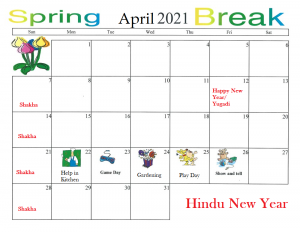 It’s April, a beautiful month of spring! Time to have some fun with gardening and spend plenty of time outdoors in the company of nature, isn’t it? But wait, how would we know that it’s exactly April and not March or May without a calendar? Hmm, now I understand why calendars are so important. Any guesses on how calendars might have been invented? Let’s read further the story of evolution of the calendar.

Why were calendars invented? 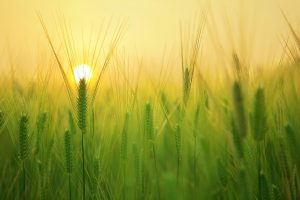 A long time ago, as the civilizationsIt means the society, culture, and way of life of people of a particular area. started to progress, humans started doing farming. As they advanced in it, they observed that agriculture is a lot more dependent on the surrounding factor, mainly the weather, which in turn, is based on the movement of the Sun and the Moon, longer and shorter days, seasons and so on. They realized that they needed to be better at measuring the patterns of seasons and keeping track of time so that they could predict the weather easily and make sound farming decisions. People started referring to distant moving objects in the sky to measure time and the Sun, Moon and stars became their obvious choices.

Can you come up with a system to measure the time without a watch or device?

Hint: Shadow (Come back on May 1st and we will provide link to an idea)

What are the main types of Calendars?

their own calendars. The oldest and the largest civilization, named Indus Valley Civilization, in particular, made the most advancement in this field. They started observing the recurring cycles of the sun and the moon, changes in shape of the moon, periodical changes in the positions of the stars in the night sky, etc. They began to keep records of these patterns and slowly, over time, calendars were evolved. As more civilizations advanced in other parts of the world, more specific calendars came into use in those civilizations.

All these different calendars originated by different civilizations can be categorized as Solar, Lunar, or Lunisolar based on what object is used for reference – the movement of the Sun, the Moon, or both. As the name suggests, the Solar calendar takes into account the Earth’s rotation around the Sun, while the Lunar calendar uses the phases of the moon to measure time. One lunar month usually spans from the new moon to the next new moon and is a period of about 29.5 days in which the moon completes its one round around the Earth. The third famous type of calendar is the Lunisolar calendar which is a lunar calendar that occasionally adds one month to align the solar years and the lunar years.

What’s the difference of days between a solar calendar and a lunar calendar?

Difference of Days between Solar and Lunar year each year =

Which calendar type do we use commonly? 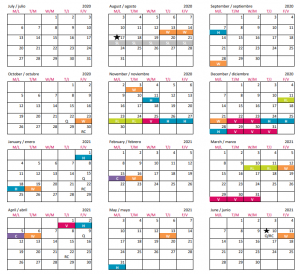 The Gregorian calendar is the most widely used calendar in the world today. It’s a Solar calendar containing 365 days a year with each year divided into 12 months.

Many Roman Catholic countries such as Italy, France, Spain and Portugal welcomed the Gregorian calendar and slowly it became a widely used calendar in Europe by 1700, around 300 years ago. Being under British rule, even India was forced to adopt this calendar.

Which other calendars are in existence other than the Gregorian calendar?

Even though the Gregorian calendar is being commonly used today in schools and businesses, many countries also like to follow their own calendars to fulfil their cultural, religious and social needs. Accordingly, there are many other calendars being followed in the world such as Chinese calendar, Ethiopian calendar, Jewish calendar, Islamic calendar, Persian calendar and so on. 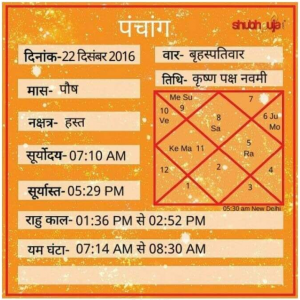 Hindus follow the Hindu calendar called Panchang. It is used to find out exact days, dates, and months of our Hindu festivals and auspicious times to observe religious practices . We, Hindus, like to begin our new works and other important life-events like weddings, home inauguration ceremonies, and festival celebrations as per the Hindu calendar Panchang. For instance, Panchang helps us to know the day of YugadiYugadi is the beginning of the Hindu new year. Celebrated in many states of Bharat with different names., Rama NavamiIt is the spring Hindu festival that celebrates the birthday of lord Rama. and Gudi PadwaIt is the Hindu festival that marks the beginning of the new year for the poeple of Maharashtra state. which commonly fall in April.

Click the Hindu Calendar/Panchang (Topic for next month ) to learn more about Panchang and its uses.